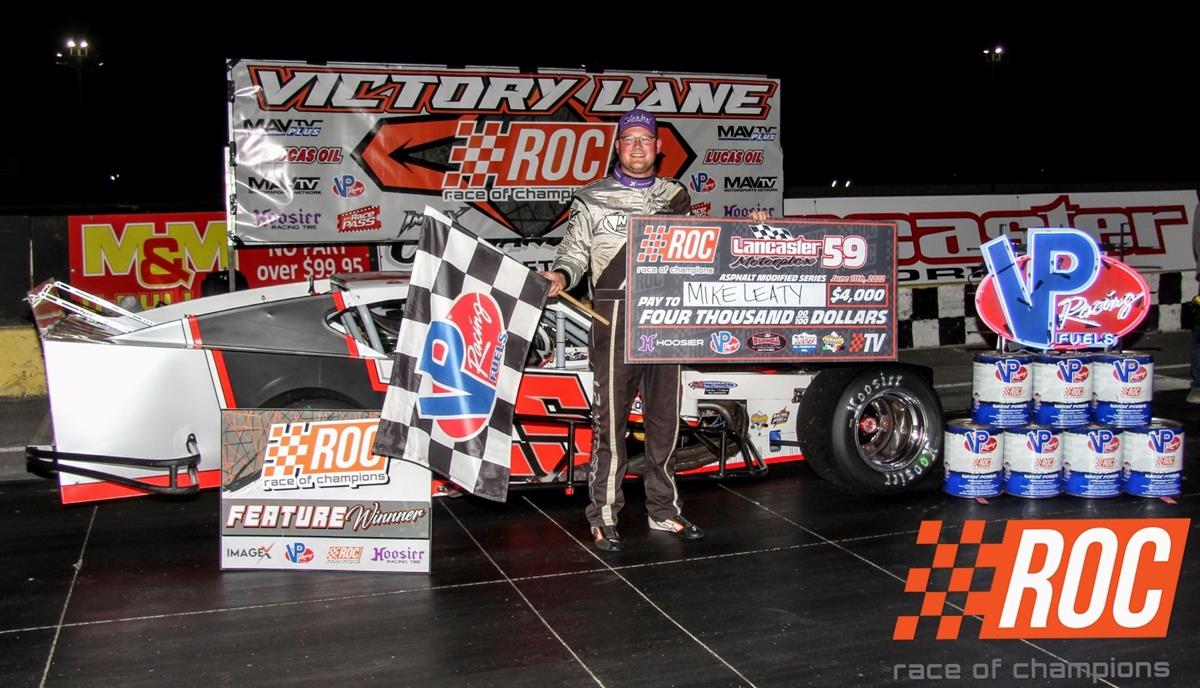 Mike Leaty of Williamson, N.Y., earned his second straight victory in Race of Champions Modified Series competition this past Saturday night as he held off a star-studded field of competitors to reach victory lane at the newly named, Lancaster (N.Y.) Motorplex, formerly Lancaster National Speedway.

Leaty was awarded $4,000 for his efforts driving his family-owned machine.

“Tonight was intense, that was for sure,” stated Leaty following victory lane festivities. “Patrick (Emerling), was back there in the the Stearns-Putney car that I had the privilege to drive last week and then there’s Matt (Hirschman), we were all right there, those guys know how to race and they have respect. It was great to win last week, but it’s extra special to win in our family owned-car with my Dad and my family here. We can now focus on July 1 at Spencer.”

Leaty came from the third starting position to inherit the lead when race leader, Andy Jankowiak of Buffalo, N.Y., who had led the early stages of the 59-lap affair spun, under caution, on the “one-to-go” lap while he was aggressively scuffing his tires.

Jankowiak recovered to finish fourth on the race track, however in post-race inspection, Jankowiak’s carburetor failed a “go-no-go” gauge on the carburetor boosters. All four (4) boosters, failed the inspection. Jankowiak will be tabbed with a post-race penalty for all points earned in the feature event and a fine of his race purse earnings. The earnings will be placed in the point fund and distributed equally to competitors who earn point fund awards in the Race of Champions Modified Series.

George Skora, III of Eden, N.Y., rounded out the top-five.

Detailed results for the “Lancaster Motorplex 59” can be found here; www.rocmodifiedseries.com/schedules/event/423675

The next Race of Champions Modified Series event is Friday, July 1 at Spencer Speedway with the 2nd annual running of the Billy Whittaker Ford F50, 50-lap $5,000-to-win.