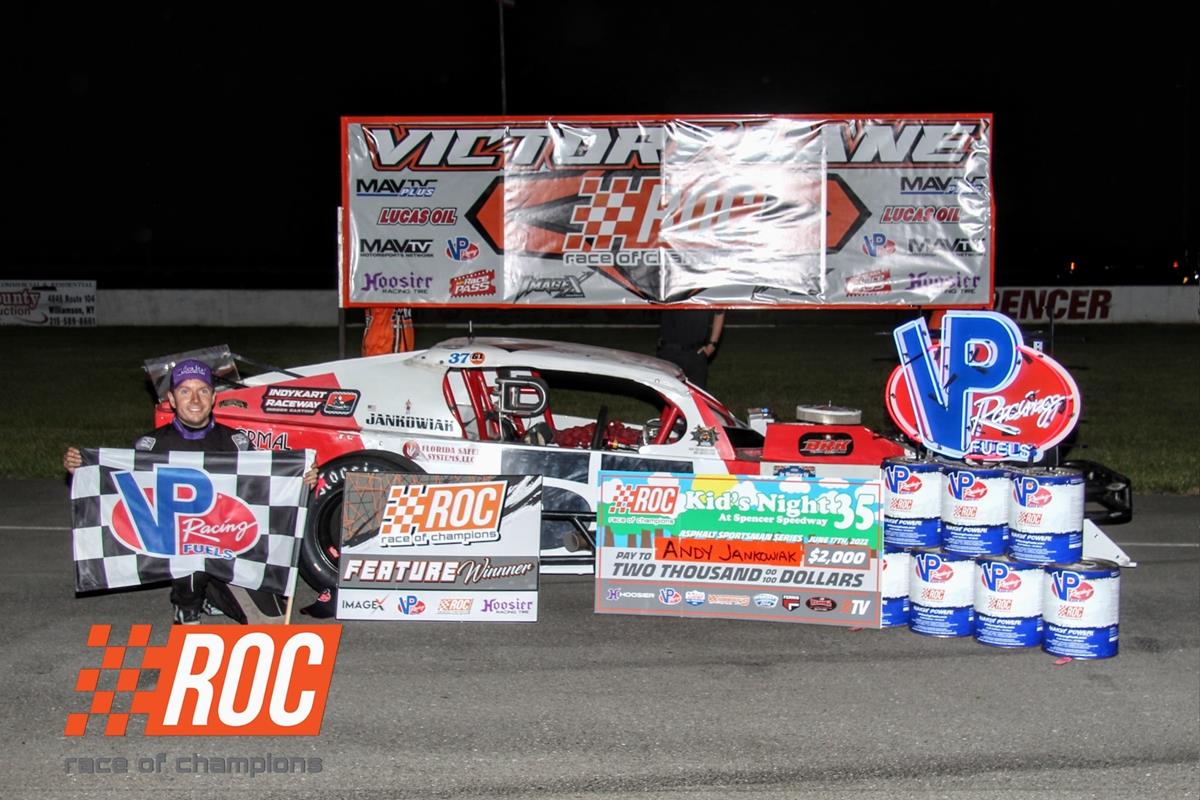 Andy Jankowiak of Buffalo, N.Y., made a late race move to retake the lead from Mike Leaty of Williamson, N.Y., to earn the win in the Race of Champions Sportsman Modified Series opener at Spencer Speedway in Williamson, N.Y., this past Friday. Jankowiak and Leaty swapped the lead late in the race entertaining fans in attendance on “Kids Night”.

“This is what we needed,” offered Jankowiak from victory lane, who earned $2,000 for his efforts. “We didn’t decide to do this until the last minute and here we are in victory lane. It’s a testament to my team and all of the people around me that help us do this.”

Tim Gullo of Elmira, N.Y., captured the Race of Champions Super Stock Series race for his first win of 2022. Tommy Barron of Ontario, N.Y., finished second after being penalized to the rear of the field for contact with race leader, Frank Chapman, III of Lockwood, N.Y., early in the race. Brian Hallett of Avon, N.Y., finished third. Matt Druar of Clarence, N.Y., and Ryan Lagoda of Lockport, N.Y., rounded out the top-five.

Prior to practice there was an altercation in the pit area between Jim Steffenhagen of Fairport, N.Y., and Tommy Barron of Ontario, N.Y., and their race teams. The following penalties have been issued in regard to altercation. Steffenhagen has been “Parked” (Conduct, section b.2 front section of the 2022 Race of Champions Modified Series rule book) and “Indefinitely Suspended” from all Race of Champions Series competition (section K. Penalties – B.) Any member that attempts to and/or does physically abuse any event official and/or any another competitor including pushing, punching, touching, grabbing and/or grabbing the official’s equipment, and/or any form of altercation, and/or disrupts any event in any manner, etc.; N.) Any member involved in an altercation that results in physical contact; U.) Any member who utilizes social media in a negative manner and/or as an exploitation for negative publicity in regard to the Race of Champions Series in any manner).

“An unfortunate incident took place Friday afternoon in the pit area prior to practice,” stated Joe Skotnicki, Race of Champions. “The incident is something we do not condone, however, we live in a society that has changed and faces many challenges including living by the court of public opinion. There is little or no will to look at an entire situation from start-to-finish, only seeing what we want to see or one instance and perhaps the most crucial factor, which is speaking out or posting on social media before assembling as many facts as possible. There are always two sides to every story and there is also, as with this situation, a management position. We have built a known culture and process within our family of series and we are constantly striving to improve it. When it comes to antagonistic and instigated efforts of intimidation with an agenda, seeking a reaction or retaliation there is no place for that in what we do. It is not professional, not productive and it has no place in this sport. People can tell you ‘what they saw’ or believe they saw something in a certain manner as well as having the ability to formulate an opinion even if not present or privy to any of the facts, which is astonishing. We have the responsibility to investigate how things developed, what was witnessed and how things ended where they did. It is challenging and there will always be people who feel that the right thing has not been done, however as has been stated in many driver’s meetings and discussions, we are just reacting to the actions of people who chose to take negative actions. It is unfortunate that we have to address situations like this, which takes time from working on making our program better.”

The next Race of Champions Modified Series event is Friday, July 1 at Spencer Speedway with the 2nd annual running of the Billy Whittaker Ford F50, 50-lap $5,000-to-win.