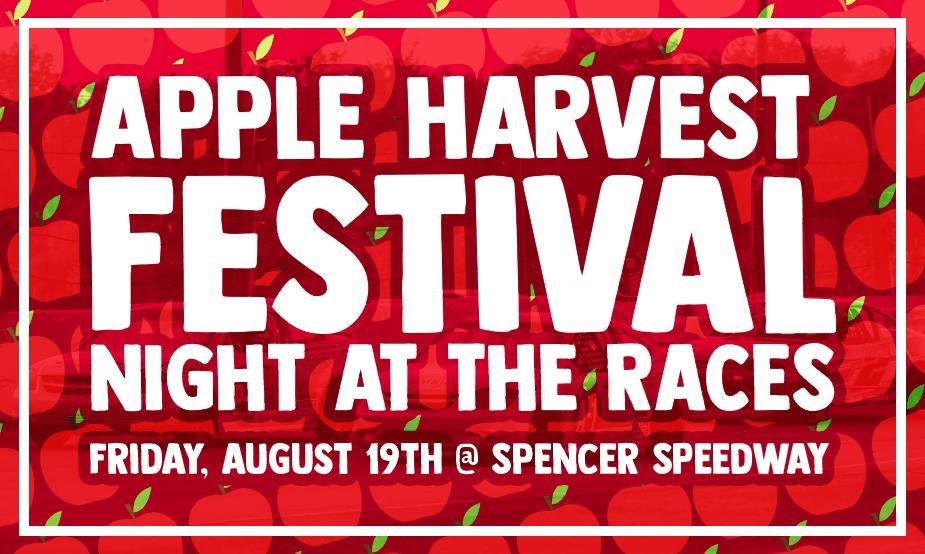 The first “Harvest Fest” event is this coming Friday night at Spencer Speedway in Williamson, N.Y., and you won’t want to miss it. There are activities for the kid’s, bike races and an apple give-away in the midway, along with an action packed night of racing on the ½-mile speedplant.

B.C. Ameele Fruit Farms of Williamson, N.Y., will be providing the apples, while apple juice will be available for the children in attendance. This will be setup next to the Williamson Apple Blossom stand in the midway area of the “Food Truck Frenzy”.

In addition to the “Harvest Fest” activities, kids and parents will once again be able to partake in Face Painting from Arlene’s Costumes. Arlene’s Costumes is “the official Airbrush Face Painters of the Buffalo Bills, Rochester Lancers, Rochester Amerks, Flower City Union Soccer Team and the Rochester Red Wings” and have worked with the Buffalo Sabres and Bandits. Arlene’s has participated in the City of Rochester’s New Year’s Eve Event, Watkins Glen International with Genesee Brewery, the Town of Irondequoit’s 4th of July Festival and the Town of Greece Holiday Celebration along with doing various corporate and school events, private birthday and holiday parties and have been the exclusive Airbrush Face Painters at the Lilac Festival for nearly 30 years.

The Arlene’s process uses vibrant color theatrical make up that is applied to 80-100 people in an hour. It is hypoallergenic and removes with liquid soap or wears off in a couple days. We apply the make up with the use of air brushes and compressor using stencils. Arlene first appeared.

Also, two other special items of interest will take place on Friday, August 19 as the Sodus Microd Club will put on their demonstration and display. The youth racing organization in Sodus, N.Y., is a part of many events coupled with the Race of Champions.

It will also be the true bicycle race of the year at Spencer. Riders will be separated by age group and take part in races down the frontstretch prior to racing action beginning Friday, August 19. Winners will have their photos taken in the first victory lane session of the night with the race winners.

Racing action will also be streamed live on www.rocmodifiedseries.tv for $22.99.

Tickets: $18 General Admission; $15 Senior/Military (65-years and older. Military with proper identification); Children 12-15 years of age will be admitted for $10. Four Pack $50 (Two Adults, Two Children). Children under the age of 12 will be admitted Free for this event.